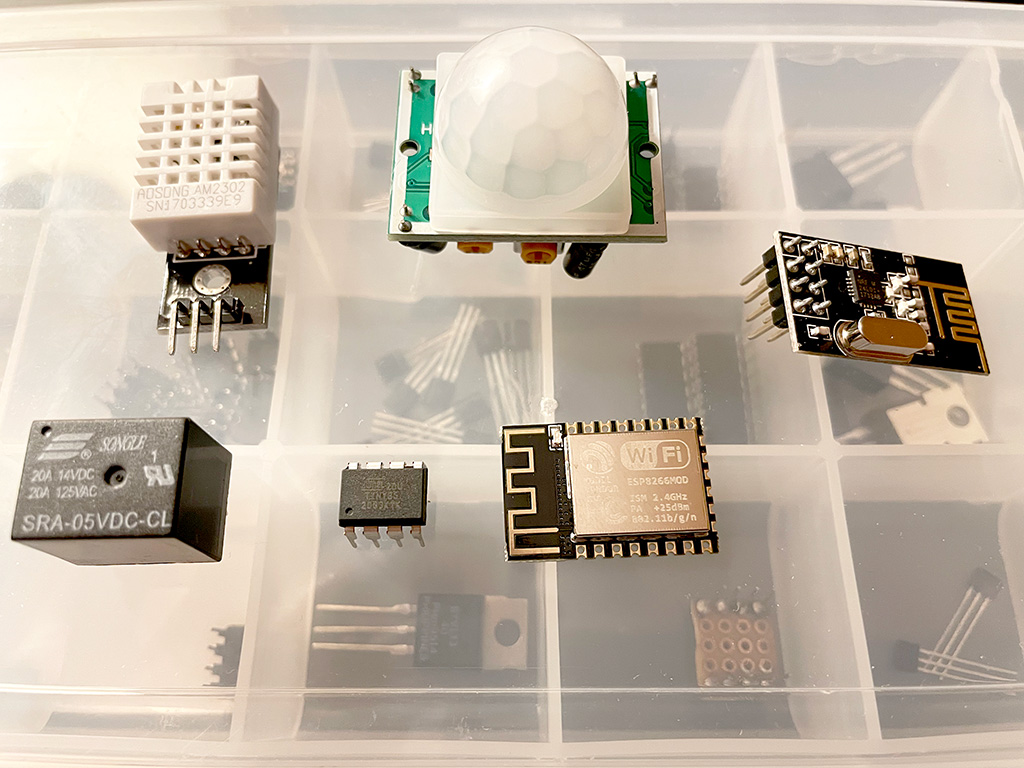 The purpose of this post is to try and document a proposal for a home automation implementation for different sensors and components using Arduino framework and hardware components that are easily available in the Arduino ecosystem.

The main driver was to steer away from having to install a WiFi chip on each and every sensor or component. The reasons for this are as follows:

Software and hardware intended to be used:

The diagram should be self explanatory. ESPHome Hub is the central piece of the architecture. It is the bridge between the home automation console and the myriad of IoT devices that can be actuators, sensors or generic components. The architecture makes use of the already existing integration between ESPHome and Home Assistant, thus just building on top of this to connect custom IoT devices.

The hub as a central piece of the architecture will have two hardware modules that are used for wireless communication: the nRF24 chip for low power wireless communication and the actual ESP WiFi module to connect the hub to Home Assistant. The diagram also depicts a logical representation of the child devices as sensors and components. Whenever a new child device starts, it will send a heartbeat signal to the Hub. This will register the device in the devices list connected to the Hub.

The component or sensor is really simple, compound out of a communication module nRF24, the actual MCU for processing the sensor data and the actual sensor or component that needs to be controlled.

A mesh of interconnected devices is usually the way to go for a professional network solution. The nRF24 chip already has a few libraries that offer the possibility to create a mesh of interconnected IoT devices, however this paper will present an alternative network topology that will focus to reduce the overall network complexity.

The nRF24 chip comes with quite a few interesting features that we can leverage to connect a large number of independent devices:

How Do the nRF24 Chips Communicate

For two chips to communicate, each chip must listen to an unique address that the other chip can use to send packets to. The ACK packet is handled a bit differently as described below.

The MultiCeiver receiver will have the possibility to listen to as many as 6 devices at one time. We will use this functionality to build the nRF Hub that will listen to multiple addresses (RX: 1, RX: 2 … Rx: n) and will be able to send back an ACK packet on each individual address or pipe.

When we need the nRF Hub to first initiate the communication, the situation described previously between two chips applies. The nRF Hub simply sets the TX address to one of the child nRF devices address and one of the pipes to listen to the same TX address for the ACK packet. Usually the pipe with the 0 index is used for receiving ACK packets from children, leaving out actually 5 addresses available to listen to other devices, not 6.

Considering our initial goal of having a large number of IoT devices communicating with the Hub and the fact that the nRF24 chip can only listen to 6 individual addresses at one time, we need to find an alternative communication protocol that can somehow satisfy our hypothesis. Knowing that the IoT devices will most of the time stay silent and rarely go back to the Hub to dump their data or receive updates from the Hub, then we are in a position of sharing the Hub communication pipes between multiple devices.

The protocol will be simple, we will use a similar approach used in programming where multiple threads need to secure access to one resource. In principle a device that would like to send data back to the hub will have to first acquire a time bound lock and then send the data. For this to work we will use two listening pipes on the hub:

For this to work we will have to ensure that the child devices do not misbehave, such that no child device will use the second pipe for communication if the lock has not been acquired yet, or flood the first pipe with too many lock acquire requests.

1. Sending data to the Hub

In order for a device to send data to the Smartpixy Hub, it will need to ask the Hub for a communication lock. To do this, we could use one pipe of the Hub to listen for these specific requests. This means that multiple devices will use the same pipe to send their request packet to the Hub. We will make use of the acknowledgement payload feature in order to send back to the child device the ACK packet containing the address of the exclusive pipe that they can use to privately talk to the Hub. With this approach there are a few issues. Let’s see what those issues are and how we can mitigate them:

Here is a diagram of how the entire flow will look like. It starts with the lock request and then it follows with the actual data send.

Here is how the Hub will handle the lock request and the data receive. Please not that the ACK payload must be prepared before the device makes the request to the hub. The ACK payload is sent back automatically by the nRF24 chip upon receiving a packet from a device. We can only control the content of this ACK payload beforehand, that is why we are first buffering it.

For the Hub to initiate the communication with other devices, it will have to temporary switch from receiving mode (RX) to transmitting mode (TX). While transmitting the Hub will be unable to receive any updates from the other devices, such that there is potentially a risk of data loss. To communicate with the other devices, the Hub will simply switch the TX address to point to one of the devices address and use the same address for the ACK packet sent back by the child devices. To limit or mitigate the chance of a data loss while the Hub is transmitting, we can increase the length of the auto retransmission interval of the child device, such that one of the auto retried packets will reach the Hub.

The structure of the packet could look like this:

Command initiated by the client to request a lock for exclusive communication with the hub.

Command initiated by the hub that informs the client of the lock request acquired by a specific client. The command will be sent back as an ACK payload. The device for which the lock is intended to is specified by the toAddress attribute.

Command initiated by the client to inform the hub of the liveness of the device and also send the device capabilities and settings.

Command initiated by the client to report a specific metric recorded by the component or sensor.

*bold attribute - are in an union, such that the size of the value held by the union would be determined by the largest member of the union, 4 bytes in this case. See the c++ union.

Command initiated by the hub to report back to the client a specific datapoint.

The programatic API should be simple, exposing only the bare minimum methods to complete the communication purposes. Coarse-grained perspective of the objects involved in the design might look like this:

Making use of the NRF24 wireless communication chip protocol we were able to create a custom protocol that can in theory accept thousands of devices to report back their data to a central hub.